As if making cookies, a birthday cake and birthday ice cream wasn’t enough for one week, I was back in the kitchen a mere two days later making, what else? Ice Cream and Cake.

I’m not usually this kitchen crazy, but when two of your favorite people at work announce their last day in the office will be the same day, well…you need to celebrate them.

And we all know how I celebrate. *reaches for butter*

Which leads me to Ben and Trent – two guys who have made me laugh non-stop since March, two guys moving on to greener work pastures, two guys who deserved a treat. 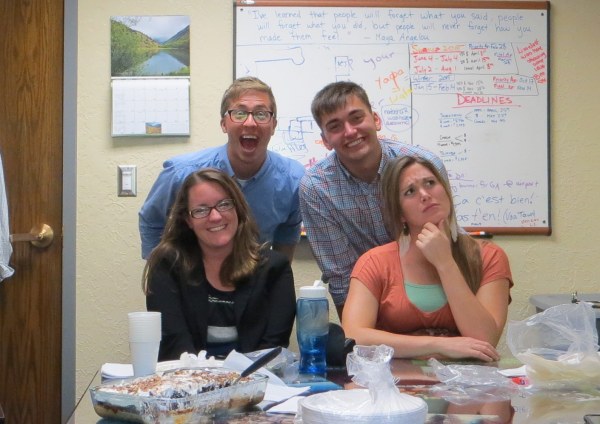 We started the party early that week with lunch, where I delivered them (leftover) cookies. (Again…those cookies! Make them!) But, for their actual last day I told them I’d deliver their favorite dessert for our small group of confidantes to enjoy.

Ben requested “Better than Sex Cake.” Um, what? I’ve already written about my hatred for desserts named like that, but my skepticism only increased when I looked up the actual recipe and saw that it’s made FROM A BOX MIX. I made it, because that’s the kind of friend I am, but come on… any cake that claims to be better than sex would not come out of a box. (insert joke here) Truth be told, it was actually pretty tasty.

As for Trent, my graphic designer/marketing partner-in-crime, well, I kinda chose his favorite dessert for him. See, we have this bond over ice cream. Before we were very close, he came to my office to tell me he was traveling to Columbus to visit friends, and I immediately hijacked the conversation to tell him about Jeni’s, show him the website, pleading with him to go. Fast forward to him coming back to the office, he was effusive with his love of her ice cream. He went twice! I had totally converted him! (Or, ruined him for life. However you want to look at it.)

This has nothing to do with ice cream, but adequately shows our typical shenanigans in the office.

I later introduced Trent to Portland’s Salt and Straw (which he also loved), and we totally spent most of our office interactions either discussing website branding or ice cream flavors. I even have emails from him that begin, “Do you have a super easy goat cheese ice cream recipe? I grabbed a box of apricots and thought a Balsamic-Glazed Apricot & Goat Cheese ice cream would be tasty.” #truth #thisiswhyilovedhim

I knew the only thing I could possibly make him would be Jeni’s ice cream. So I brought her first cookbook into the office and let him have free reign to pick a flavor. He teetered between five or six before finally placing the open book in front of me.

A boy after my own heart! He chose “Buckeye State:” her peanut butter chocolate flavor—one I had, unbelievably, never had.

And that is how I found myself back in the kitchen two days after a birthday-binge weekend, making yet more cake and ice cream. 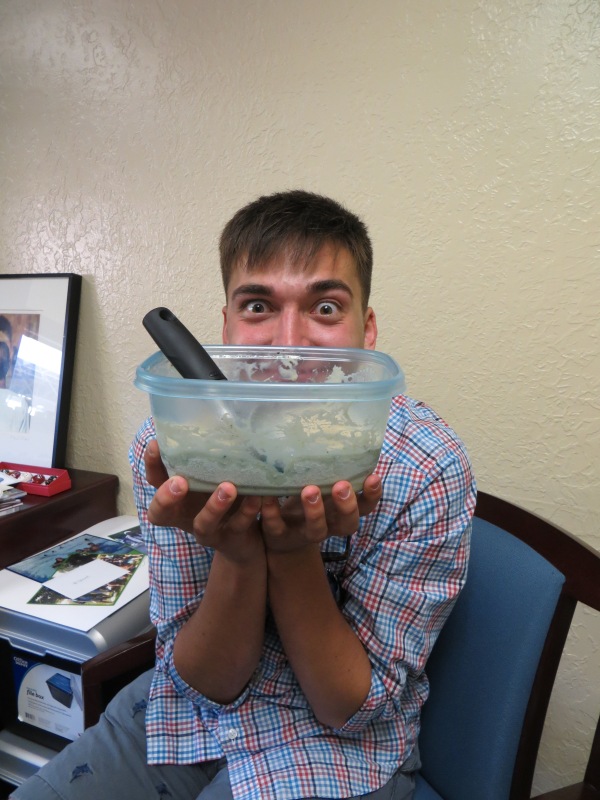 Not only does this base reaffirm everything I love about peanut butter, honey and salt…and dairy…but the chocolate. Oh my, that chocolate. In the final moments of the churning process, Jeni has you drizzle thin ribbons of melted chocolate into the ice cream base. As soon as it hits the icy mixture, it hardens and cracks apart creating what Jeni calls freckles of chocolate. FRECKLES! Has there ever been a better term for little shards of chocolate—the perfect crunch in an otherwise creamy, dreamy base? Just when I didn’t think I could love Jeni more. …..freckles.

I know I keep saying this, especially when I make a new Jeni’s recipe. But, this. THIS. It’s my favorite ice cream recipe I’ve ever made.

Major thanks to Ben and Trent for making my workdays fabulous and for picking a box-mix cake and the most amazing recipe in Jeni’s arsenal. This has got be the most delicious way to ever say “I’ll miss you.”

And this has got to be the most awkward: 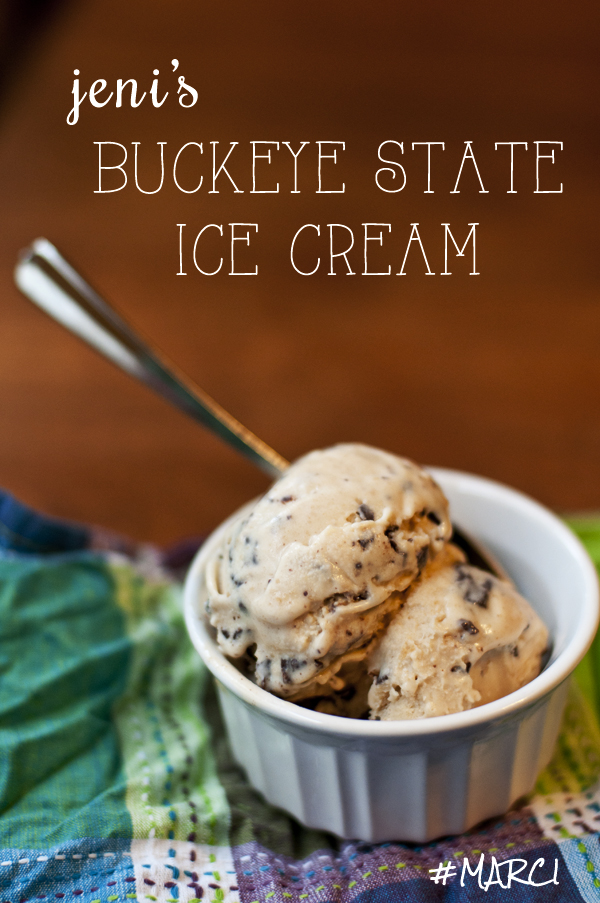 Mix about 2 tablespoons of the milk with the cornstarch in a small bowl and make a smooth slurry. Whisk the cream cheese, peanut butter, and salt in a medium bowl until smooth. Fill a large bowl with ice and water.

Combine the remaining milk, the cream, sugar, corn syrup, and honey in a 4-quart saucepan, bring to a rolling boil over medium-high heat, and boil for 4 minutes. Remove from the heat, and gradually whisk in the cornstarch slurry. Bring the mixture back to a boil over medium-high heat and cook, stirring with a heatproof spatula, until slightly thickened, about 1 minute. Remove from the heat.

Gradually whisk the hot milk mixture into the cream cheese mixture until smooth. Pour the mixture into a one-gallon freezer bag and submerge the sealed bag in the ice bath. Let stand, adding more ice as necessary, until cold, about 30 minutes.

Pack the ice cream into a storage container, press a sheet of parchment directly against the surface, and seal with an airtight lid. Freeze in the back of your freezer until firm, at least 4 hours.