Winter. Even though we haven’t had the highly-predicted horrible season so far, it’s still my favorite time to crawl under a blanket with a book and block out the cold world around me.

This week I’m in Miami, so I’ve blocked all thoughts of cold weather (and books) from my mind. I didn’t even bring one with me, just a stack of old Entertainment Weekly mags that I’ve been neglecting. It’s what the promise of sunshine does to me.

There wasn’t much snow on the ground when I left Utah, but here are a few pics of our recent jaunt down to Ogden. 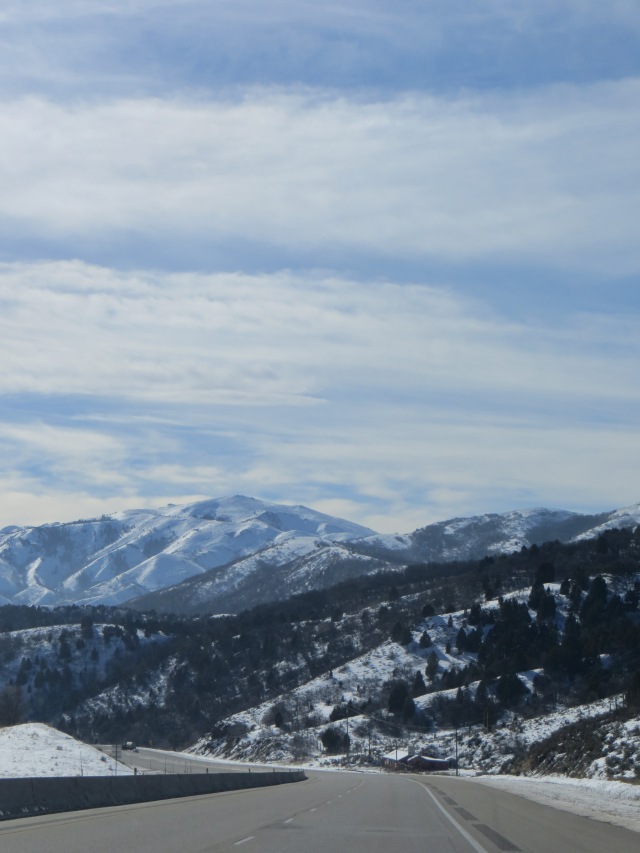 Just the right amount of winter.

Like the last Shelf Life installment, this was truly the list that the library built. It seemed like every few days a new book would come in and I’d be under the gun to finish them all in time. There were a few necessary day-long readathons, but otherwise this has been a few chill months of easy reading with some clear winners. Let’s review!

My guess is that you’ve heard of this book. It’s been all the rage of newspapers, magazines, book clubs… you name it. At 500+ pages, it’s good to know that it will be a quick, all-engrossing read. I don’t want to give its surprises away, but it definitely packs a few plot punches. The ending left me a little wanting, but overall this is a fantastic read.

I read Meg Wolitzer’s very-adult, very-touching The Interestings last year and couldn’t get over the incredible characters and her beautiful writing. Where had this lady been my entire reading life? This is her latest novel and though it’s meant for the YA crowd, it’s in no way cheesy or underdeveloped. This is a complex story that I felt was truly stunning. It’s a short read and it says a lot that I was considering ignoring the book for a few days just to make it last a little longer. But I couldn’t stay away. She is quickly becoming one of my favorite authors.

My former boss knows I love to read. She’d see me grab my book every day and head off for my lunch break. I knew she was part of a book club, but we rarely talked about what we were reading. Until she read this book. She talked about it so much–no spoiler details, just how much she was enjoying it–that she demanded I read it after her. She gave it to me right before I left, so I was under a bit of a time crunch, but it wouldn’t have mattered. I flew through this thriller like no one’s business. I kept telling Joe every night, “You need to read this.” “It should be a movie.” and on and on and on. No spoilers here, but just be warned that when you start you won’t stop…and you also won’t shut up about it.

Over the summer, a few of my friends decided they would form a book club in order to read the entire Man Booker Prize list. This is the same group I declined because I couldn’t get on board with all of the books, but when reviewing the list this title stood out above the rest. At the time it was even projected to take the prize (it didn’t), so I requested it from the library and waited. If you’ve been following these posts, you know I’m a sucker for stories that take place over decades/generations. There’s something so fulfilling about them, like a deeper connection to the characters. Us follows a marriage from early, exciting beginnings to crumbling mid-life crisis–skipping back and forth between flashbacks and a present day whirlwind trip around Europe–a last hoorah for the unhappy couple. My favorite part was reading about their adventures in all of these European cities that Joe and I have visited–namely at the start of our relationship when everything was (is!) wonderful and exciting. Made me want to jump on a plane and go back with him in hand. I realize this all sounds depressing, but I swear it’s a funny, funny book. And poignant. I’d highly recommend it.

Other than catching a few of his comedy specials on TV, I wasn’t too familiar with Jim Gaffigan until I read his Dad is Fat two summers ago. This guy….he’s hilarious. And while Dad is Fat chronicles is parenting choices, Food: A Love Story chronicles…you guessed it….his passion for food. I can relate. It was fun reading his take on American eating habits, Cincinnati chili, Portland doughnuts, and Taco Bell to name a few. Some parts were definitely laugh-out-loud funny, but like most comedians, once you get a taste for their tone, their timing, their punchlines….it all starts to blend together a bit. I mean, how much can one wax rhapsodic about bacon before it gets old? (Asks the vegetarian.) I wasn’t blown away by it, but I do appreciate his love of all things tasty.

Some of the funniest quips I’ve read in the past year have come from leading female comedians who have put pen to paper and written phenomenal reads. Tina Fey, Mindy Kaling, even the highly-controversial Lena Dunham. They are hilarious on TV, but on paper they are even better. This is no different for Amy Poehler, comedian gem and newly-minted author. When Yes, Please came out, I put my name on the library wait-list for both the book and the audiobook. Not surprisingly, the audiobook came first. I’m not one to listen to audiobooks normally, especially when I’m not on a road trip. The only other book I’ve listened to in the last year (or two, three?) is one of Maya Angelou’s — and that was only because I wanted to hear her voice after she had died. But, after finishing this, I can’t imagine experiencing it any other way.

Listening to Amy read her thoughts on every conceivable subject made me so happy. Her snark, her wit, her timing…all of those would be hard to replicate in your own head while holding the book. There are several sections where she just laughs at herself in such an honest way. I love it. It was like listening to a friend. It’s not just Amy, either. She employs the help of Carol Burnett, Seth Meyers, Mike Schur (Creator of Parks and Rec), Patrick Stewart, Kathleen Turner, and her own parents. Here are some of my favorite sections:

Listen to this, please.

Here are some words you don’t expect to make repeat appearances in a novel about a women’s prison: camaraderie, friend, buddy. Joe and I watched the first season of the hit Netflix show (of the same name, for those living in a cave) before I decided I wanted to read the book. I was nervous that the book would be too different than the show, that the characters and the drama I loved would be missing, but most everyone was there in some form. What I didn’t expect it to be was so touching and honest. Here are some of my favorite lines:

8. Smoke Gets in Your Eyes: And Other Lessons from the Crematory, Caitlin Doughty

I’m a morbid person, sometimes obsessed with learning details of horrific tragedies like plane crashes and missing children. I know. I’m the worst. I blame it on my not facing death until I was in my 30s. That’s why this book was perfect for me. It’s morbid, sure, but it speaks to our country’s and our generations’ denial of death. There were chapters I had to stomach through–namely cannibalism’s cultural roots and the author’s experience cremating babies born stillborn or with disease–but for the most part I was intrigued by her frank discussions and brutal honesty on a taboo subject. Perhaps the most jarring part for me was the end, where Doughty spells out the lack of dignified deaths by our culture of silence. That we’d rather prolong life at any cost. This, obviously, hit a little too close to home. She also spoke about the number of doctors (spoiler alert: not many) going into geriatric care and how this will be a HUGE problem in a matter of years, if not starting already. Yes, people are terrified of death, but as she writes: “Death might appear to destroy the meaning in our lives, but in fact it is the very source of our creativity. The great achievements of humanity were born out of the deadlines imposed by death.”

I wouldn’t recommend this book for anyone who doesn’t want frank details about what happens to your body when you die, but it is a good food for thought. Oh, and one more thing….don’t you dare have me embalmed. K-thanks.

I’m a sucker for funny people writing books. Even so, I am not sure I would have picked up this book had EW not told me it was a must-read of the season. Written in the style of the “choose your own adventure” novels loved by children of the 80s, his writing is funny and I was able to connect with him as someone who hated sports, played the horn and was obsessed with Les Mis growing up. But…that’s pretty much where our connection ended. After reading this I’m convinced that NPH is talented and has a wicked sense of humor, but I’m also quite convinced he’s a total jerk. Never was there any humility shown in his pages. I actually feel embarrassed for him that someday his children will read this. NPH….he’s putting the “ass” in “class.” Sorry, EW, this one I just can’t recommend.

Major fist pumping took place when I finally finished this 960-page tome–the last installment (as of now) of the A Song of Ice and Fire (aka: Game of Thrones) series. And just like the last book, GRRM spells out his true feelings in his Acknowledgements. “The last one was a bitch. This one was three bitches and a bastard.” All true things. It was imperative to finish this sucker before the show comes back this Spring. I read Book 4 last summer and this has been on my radar ever since. I’d like to thank the massive blankets of snow that helped me hunker down and git’er done. I honestly liked this book the best of the five and look forward to seeing it play out in the upcoming season. (Sorry, no spoilers.) Bonus: I was surprised to learn that this book has one of my favorite GRRM quotes (I thought it was just a random quote, not from a character in the story): “A reader lives a thousand lives before he dies. The man who never reads only lives once.” Can I get an ‘Amen!’?

After dancing with dragons, Euphoria’s 250 pages felt like a magazine. Lots of people and publications have raved about this, which (broken record syndrome) led me to reserve it from the library. I agree that the writing is lovely, but the whole book was a bit “eh” to me. So much so, I have struggled for days to think of something to write about its plot or characters or language. I’ve got nothing. This was all around pretty forgettable to me. Sad face.

Among a shared love of emailing about life, work, family, fitbits and the arts, I love talking books with my dear friend Amy. She highly recommended this one (as did a favorite blogger of mine) and you know how I feel about my friends’ recommendations….Love. Them. This is a beautiful tale of young love and so vividly captures how awkward and unsettling and, yet, all-encompassing that love can be. That special time when each day brings fireworks and doubt and confidence and fear all at the same time. It took me straight back to those high school halls. If you aren’t ready to do the same, I wouldn’t pick this up!