A week ago today started out as planned: Joe and I were packing up in Miami and heading to the airport, ready to be home with our pup and non-humid climate. We flew different flights, different airlines, so we said goodbye outside my terminal with a “see ya tonight!” at around 8:30am. My first stop was to browse the airport’s Books & Books, my absolute favorite Miami bookstore. 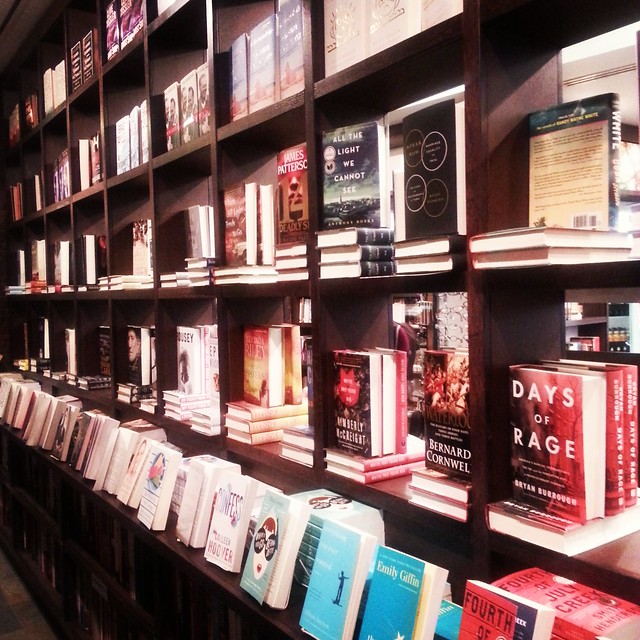 My flight was a little delayed to Dallas/Ft. Worth, so I lost myself in dust jacket previews and pretty covers.

But then my flight was delayed a lot. My layover in DFW wasn’t supposed to be that long anyway, so I asked the front desk if I should be worried. Should I book a later flight out from DFW? Noooo, no, no no, no, they said. Apparently everything was getting delayed in DFW because of storms. “You’ll be fine.”

I should have known better.

After a two hour delay in Miami, we finally flew out and reached Texas during a break in the storm. When we landed I quickly turned on my phone and googled my next flight. “Cancelled” it read in big red block letters.

There was a lovely older lady waiting at the gate and before I could open my mouth to ask her how best to proceed she just said “Gate 25.” Oookay, so off I hustled down about 10 gates only to be greeted by the longest line I’ve ever seen in my life. Every flight cancelled, every flight missed, every plane grounded or delayed….their passengers were in a winding line of at least a thousand people trying to reach the three customer service agents at Gate 25. The line was seven gates long itself. 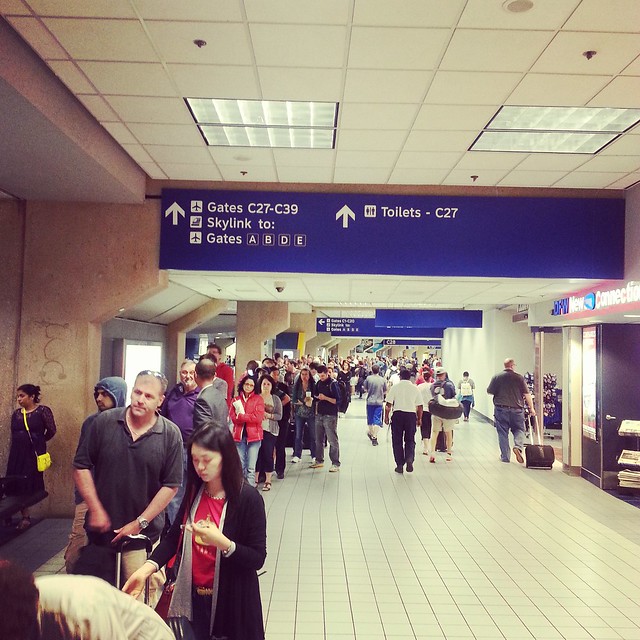 There just had to be a better way! I frantically called the American Airlines customer number and reservation number in vain. They were so slammed with calls that they wouldn’t let you stay on hold. They just said to call back. The website was down. Nothing was working. The line was all I had.

Lucky for me I was standing next to two awesome people: Jaci (pronounced Jackie) and Tommy. 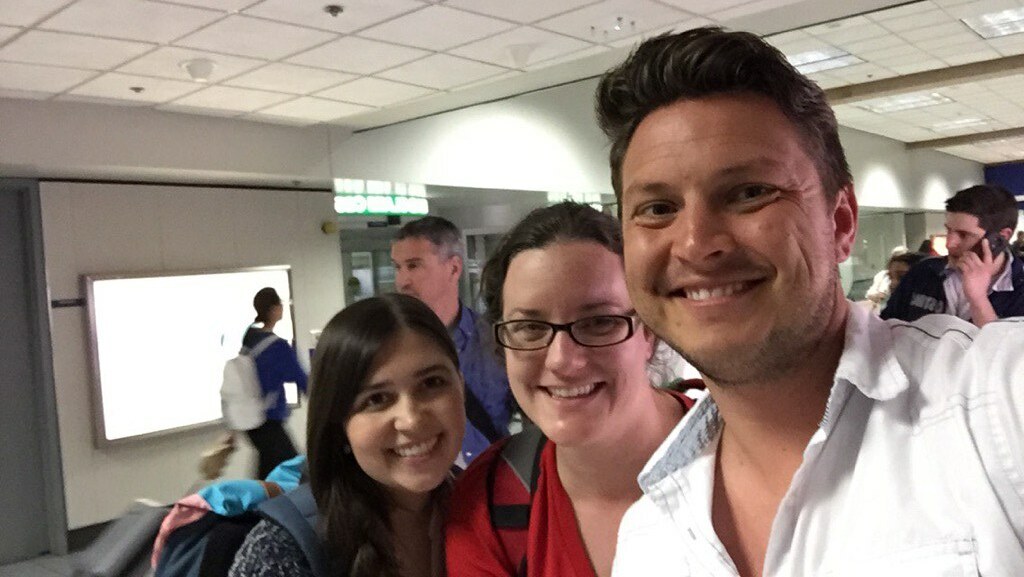 Jaci was heading to Spain for a summer study abroad and Tommy was trying to get back to Salt Lake after a cruise with his friends. The three of us stood in line together for six-and-a-half hours! 3:30 to 10pm! Our conversations started out as you might expect “where do you live, what do you do, tell me about your family,” but that only got us so far in the line. By hours 3 and 4 we were asking “what’s your favorite place you’ve ever been, best book you’ve ever read, favorite movie” and by hour 5 we were making up stories about other people in line. “What do you think his name is? What’s his story?” By hour 6? We were in tears.

Tommy, a member of the LDS church and native of Provo, told us that Mother’s Day and Christmas were the only two times a year that an LDS missionary could call home. He had left Miami early to be home for Mother’s Day and to be there when his brother called from Japan. In all honesty, the entire line was filled with these stories with it being Mother’s Day. I told Tommy he should just join the skype call from his phone, so around hour 5 we all got to say hi to his brother in Japan before holding Tommy’s space in line so he could talk to them privately.

Since we hauled it to the line right after the plane, I hadn’t eaten anything since breakfast in Miami, so at one point Jaci ran to Taco Bell and picked up dollar tacos and burritos for the people around us. Seriously, these situations bring out both the best and worst in humanity.

Fast forward to 10pm. We finally reach the front of the line. Tommy and I get added to the 150-person strong standby list and learn our first confirmed opportunity to get out would be Wednesday morning. Cue my jaw on the floor. Jaci is told she should have been in a different line for international flights that entire time. She immediately burst into tears and, I admit, my eyes were wet too. It was so sad. Being a TCU student, her friend came to get her for the night and Tommy and I were left to figure out how to spend the rest of our airport party.

Unfortunately all of the shops and food vendors close at 10pm, so we just missed any opportunity to get more food or a toothbrush or a pillow. We had heard there was a 24-hour restaurant in another terminal, so we set off for that. But first we tried to find some cots, which had pretty much all been claimed by the time we got out of the line. We found a family with a stack of them and asked if they could spare two. They said no, but as we were walking away they called us back and gave us each a cot with a swift “we’re getting a hotel, we can’t do this.”

Tommy and I met up with Sue, an older lady who had been visiting her daughter. She didn’t have a cot, so Tommy gave her his and we all found a somewhat-safe, somewhat-clear, somewhat-clean gate to set up camp. 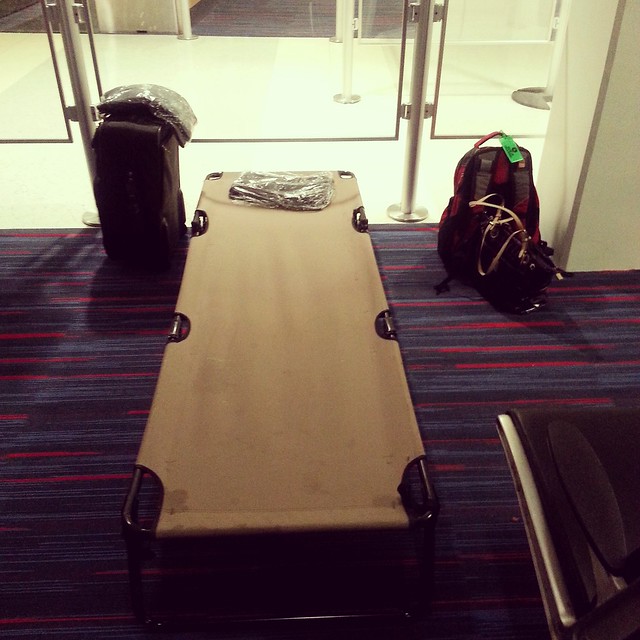 This is the photo I sent Joe that night. Sue’s in the background and Tommy’s a few rows over. 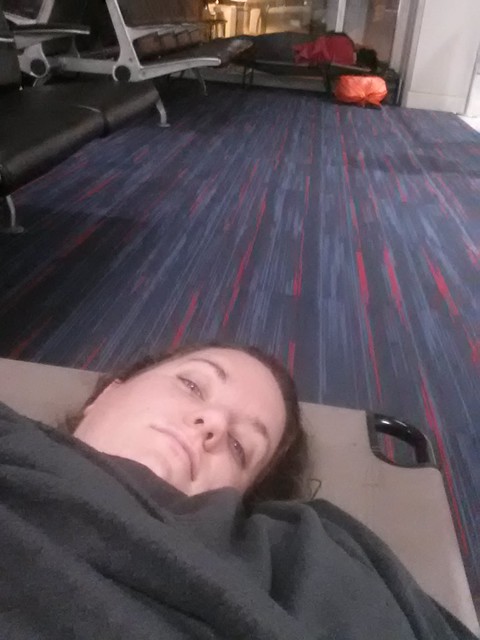 This was my view. I figured I stared at it so long I should take a picture of that too. 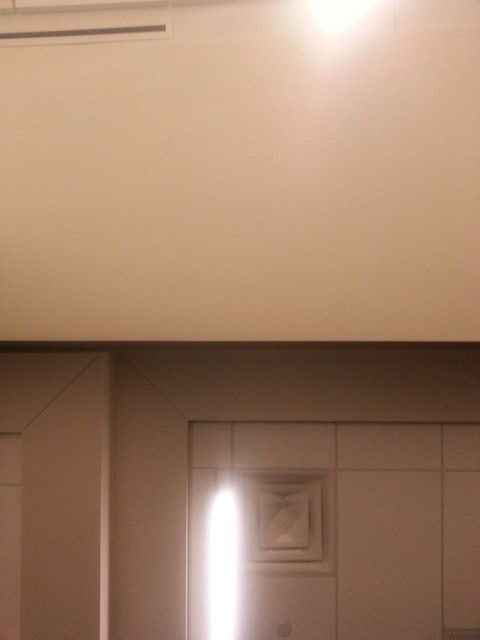 Sleeping was impossible. The fluorescent lights were relentless in their brightness and buzzing and the TVs set to the most obnoxious news were screaming at us all night. I finally put the blanket over my face and tried to just rest as much as possible.

By 5:00am new flights were landing at DFW so another level of commotion was added to the mix. I just got up and went in search of food and coffee…even a non-drinker has her limits. When I was walking back to where Tommy and Sue were I noticed that people were already standing in line at the first SLC flight gate, hoping to up their odds at getting on. Crap. So I got in line too. What’s another line at this point? I waited for an hour and when the lady in front of me got to the desk, the agent said “I’m not supposed to be here and I don’t know if anyone else is coming” and walked away. I thought I was going to faint.

So I went back to where I left Tommy and Sue and both were gone, but I quickly found them and told them about the gate agent madness. We walked back over together and got back in line…in case someone came back. Long story a bit shorter: Tommy and I were numbers 80 and 85 on the standby list. Nothing could be done to move us at this time and we’d just have to sit at every flight leaving for SLC to see its availability.

At least we got to watch the sun come up. 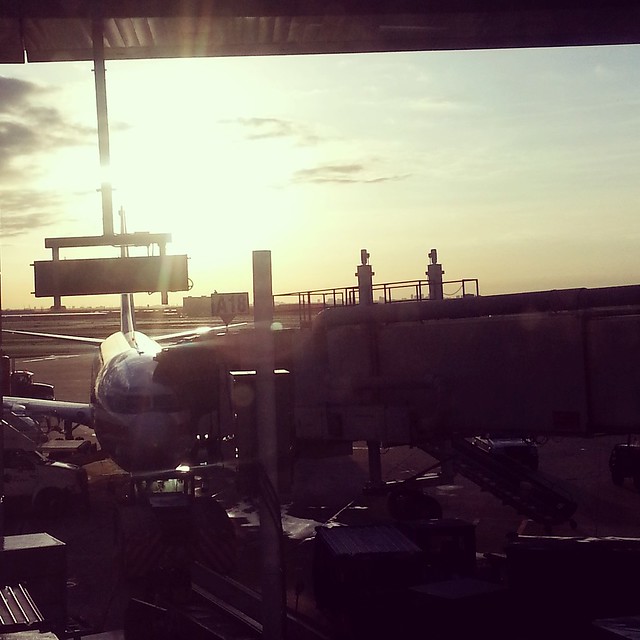 Amongst the abandoned cots everywhere. 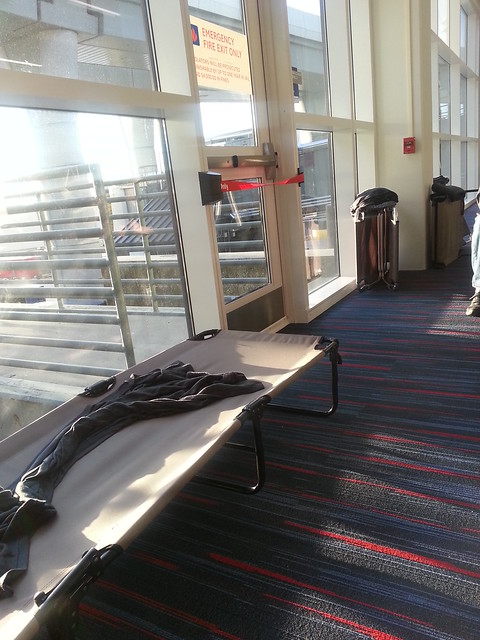 And the horrible footage of the storm that left us there in the first place. Absolutely heartbreaking. 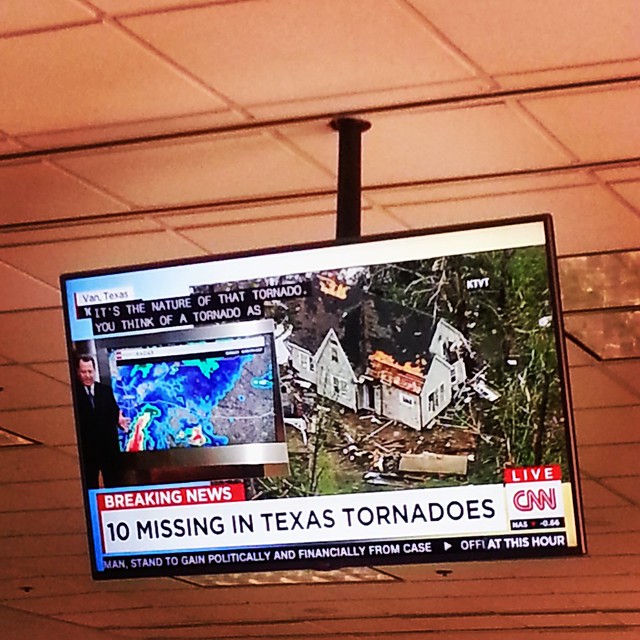 But we finally were able to eat some real food between our gate hopping all morning. 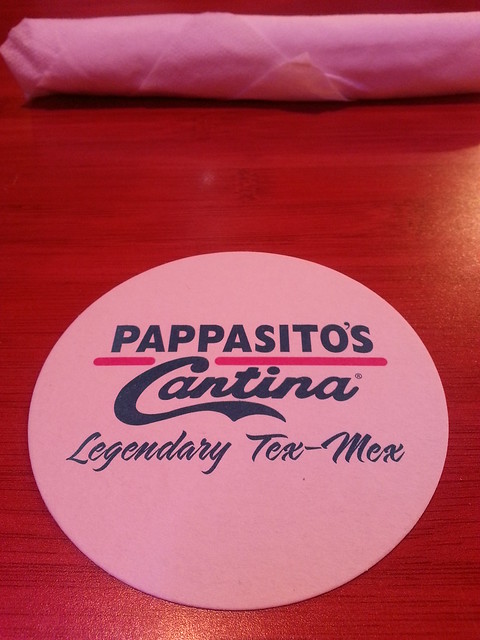 At some point before lunch I emailed work and asked them to see if the travel agent who booked my flight could find me a way out of there faster. After a few emails back and forth, she said she could fly me to San Diego and get me the last seat (on Delta!) to Salt Lake that afternoon. “Will that work?” YES, YES!, all of the yeses!!!! And, after a few more lines to wait through, that’s how I got this. 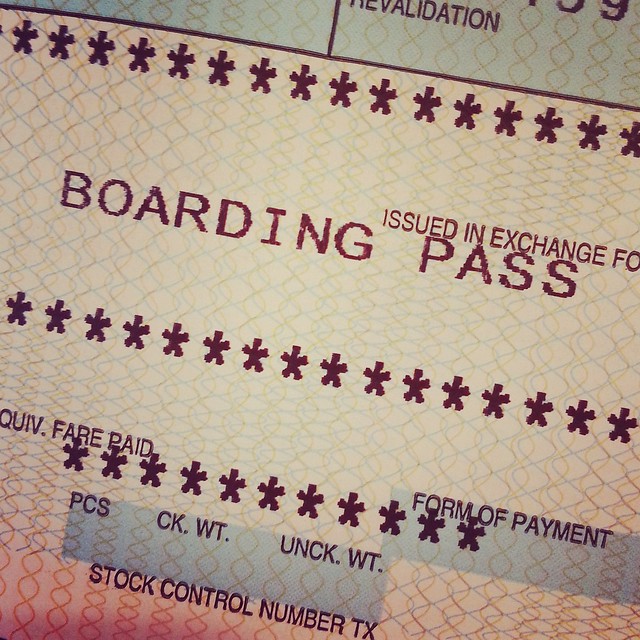 I had five boarding/standby passes littering my purse–each a little token of hope–but this was my Golden Ticket. I was going home. It was sad leaving my partners in this crime, but they understood. Get on that plane! they said.

As grateful as I was to be on ANY plane, this was my view. 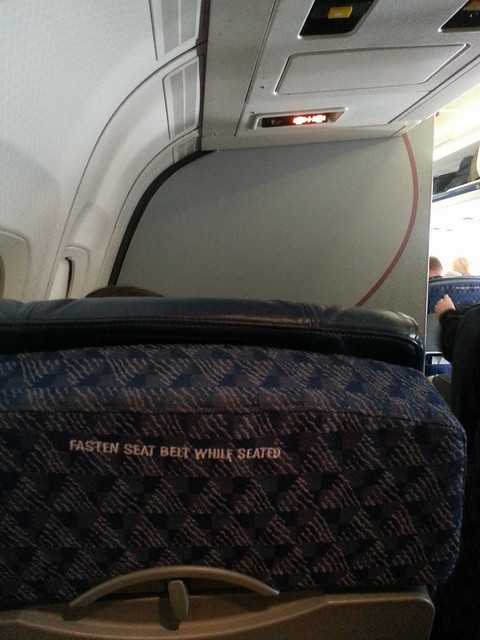 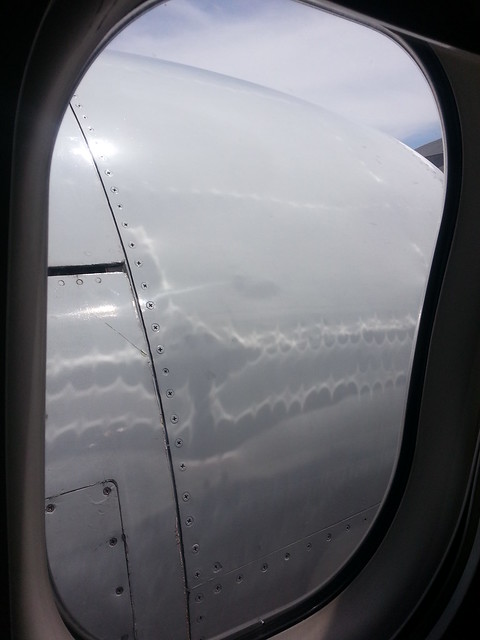 I didn’t know I could be so claustrophobic! San Diego was the anti-DFW. Clean and empty. I still can’t believe I flew from Miami to San Diego–coast to freakin’ coast–to get home, but I would’ve done anything at that point. 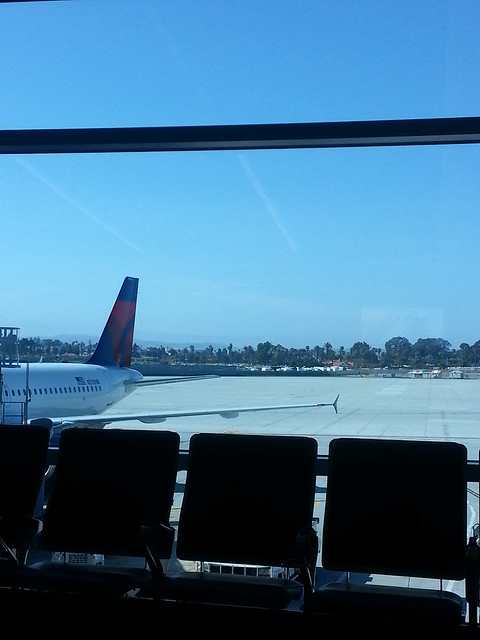 When I landed in Utah I was told to go to the Delta counter to file paperwork for my American-tagged luggage. I took a chance and just walked to the American terminal, hoping my bag made it before I did. Sure enough, it was there and we had the most glorious of reunions. 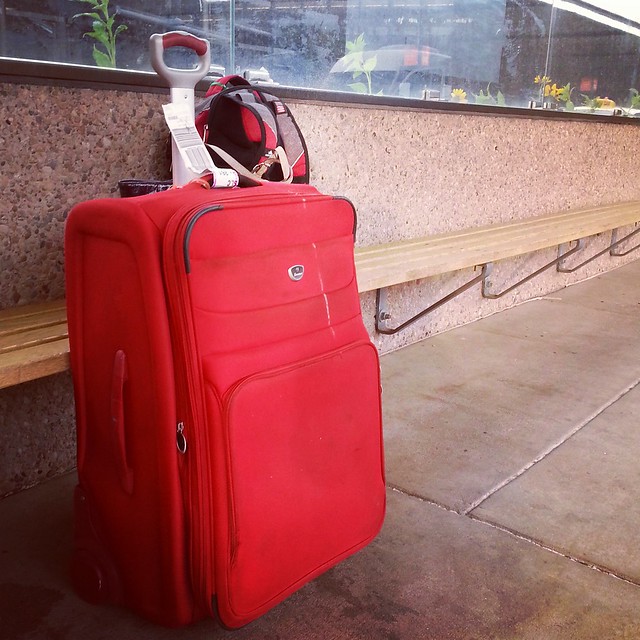 As I waited outside for Joe, I was hit by the fact that I was breathing my first fresh air in 40 hours. I wanted to kiss the ground.

We pulled away from the airport and my phone dinged. It was Tommy. He was going to get on the last flight out that night. No Wednesday flights needed! It was amazing to find those friends in that horrific line. It was a bond forged fast and furious in ridiculousness, hope and sore feet. But, at the heart of this mess are the tornado victims, whose losses were not lost on us, even in our own misery.

And now it’s Sunday again and I’m back at the airport for another two flights. Apparently I just can’t quit. Let’s hope no cots are needed for the next 10 days.