One of my favorite things to do this time of year is leaf spotting. It’s the early equivalent of driving around to look at Christmas lights. I want to get out, crunch through the fallen leaves and inspect those still hanging on in all their vibrant glory. Like this: 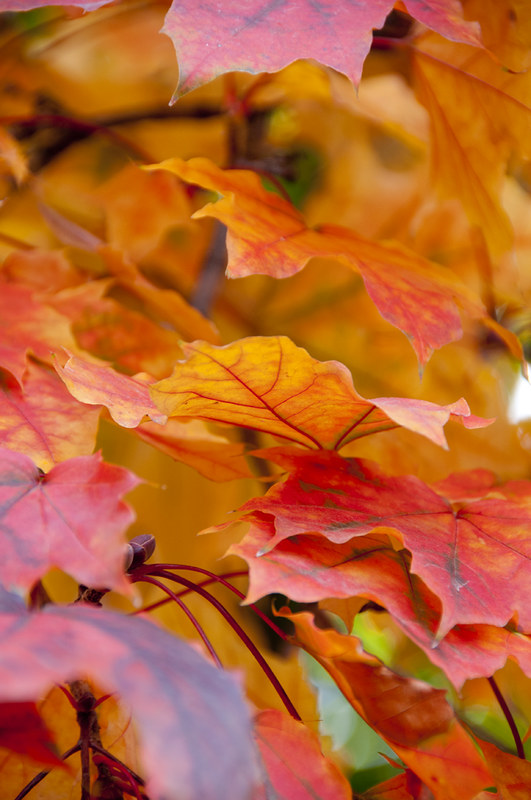 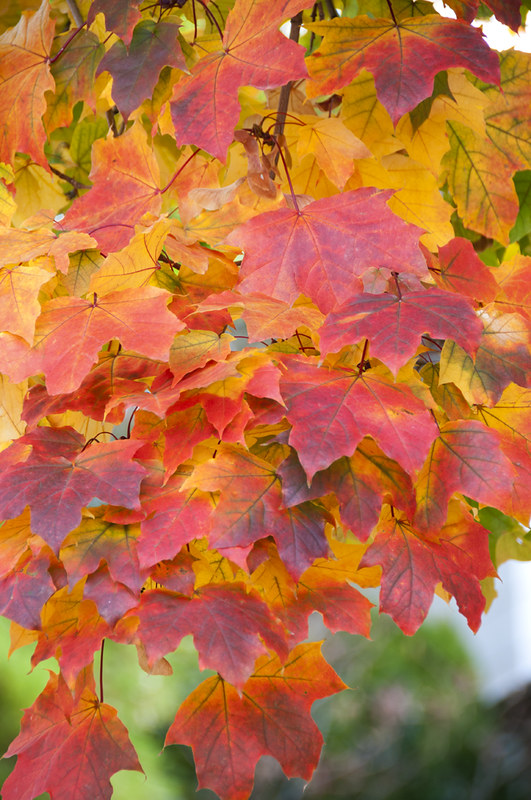 It’s been such a weird Fall for us. It stayed warm much longer than normal, resulting in these summer-esque blooms still popping up around town. (Enjoy it now before next week’s snows show ’em who’s boss.) 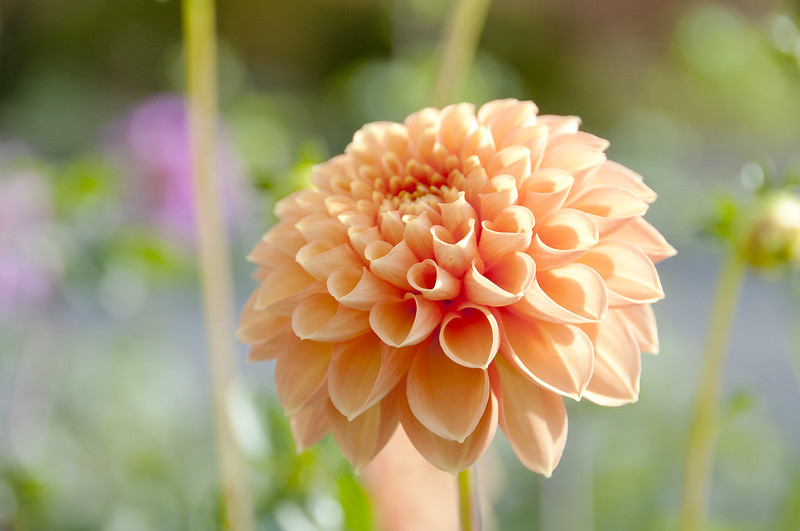 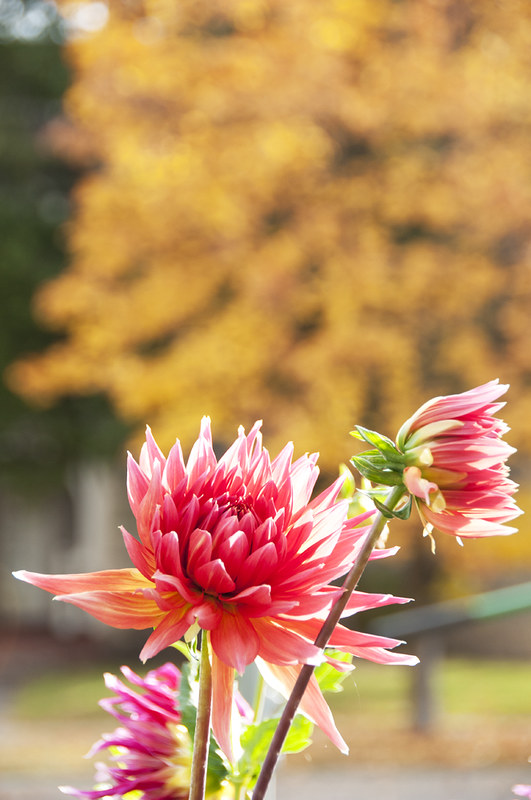 I like this one. It’s all “STOP! Look around! It’s GORGEOUS!” 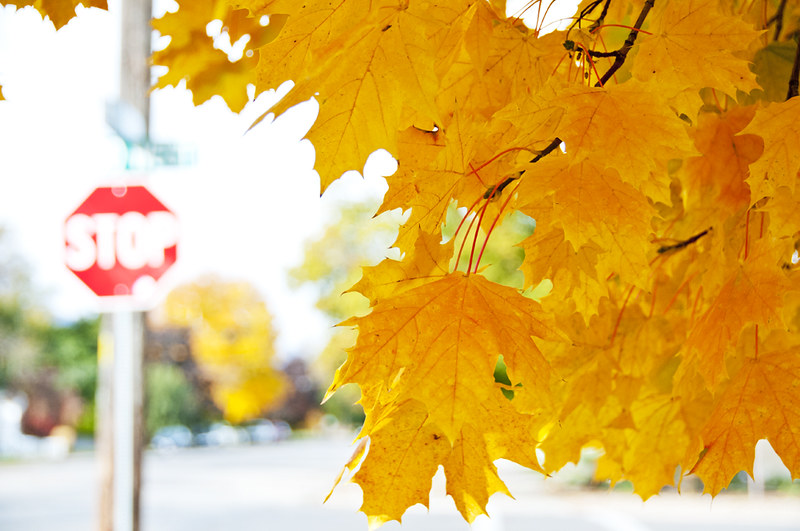 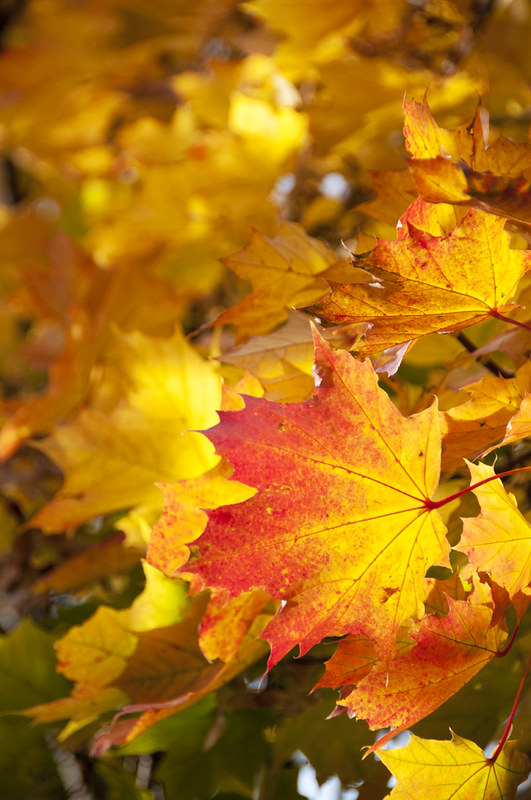 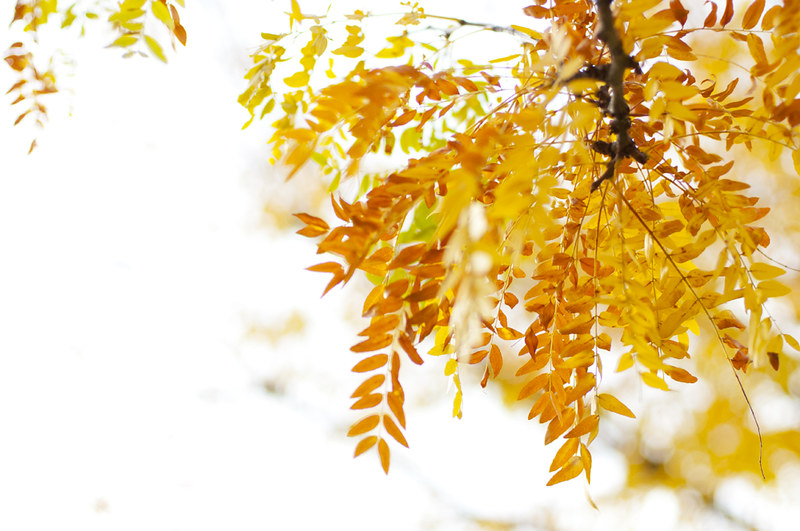 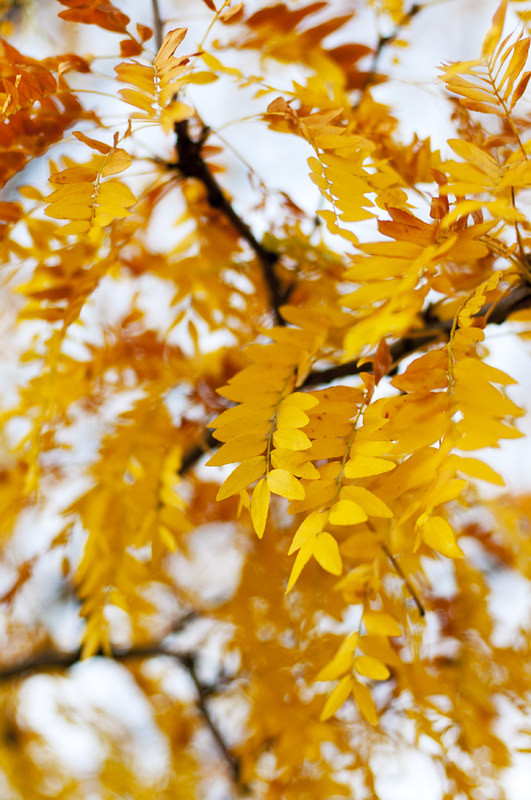 Even the campus is looking very Fall Fabulous these days. 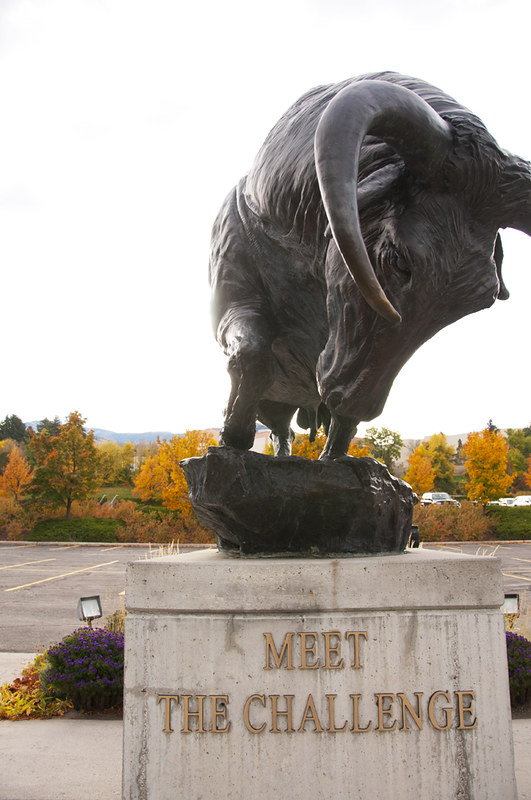 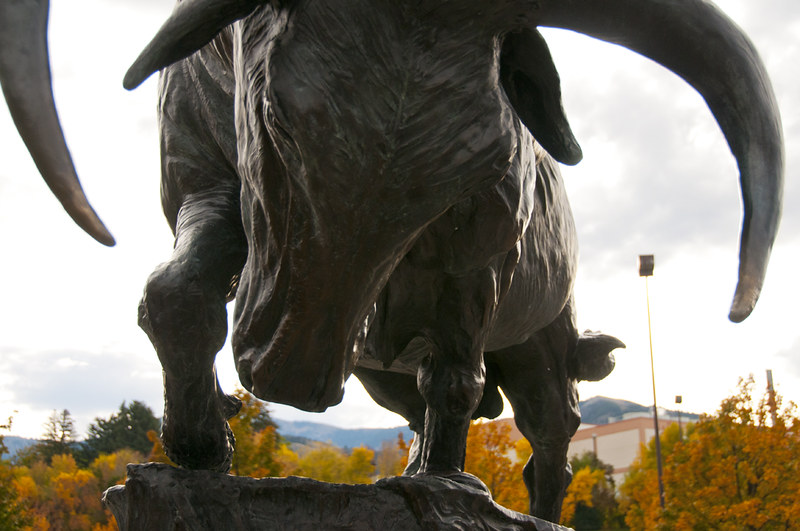 Okay, time to take this post by the horns and get down to business. On to the books!

I have to check, but this might have been on my to-read list longer than Anna Karenina. An impressive feat of dragging feet. I’m so used to reading library books on a deadline, that when a 770-page novel sits on my actual bookshelf it gets constantly overshadowed by looming due dates. Despite its early success and Pultizer-Prize win, this book has started (at least in my reader circles) to cause a lot of “meh”s. The beginning is fabulous and whirlwind and intense and poignant, but the middle and, especially, the end? It was like nails on a chalkboard for me. Surely the editor could have done a better job paring this thing down to a more manageable 400-ish pages?

The story–about a young boy thrust into unfamiliar and dangerous waters after a life-altering tragedy–spans many years, but keeps its core characters close — maybe its only saving grace. I did like seeing them grow (or not grow). The characters are strong and believable and captivating, but the plot is so ridiculous it was hard to absorb much else.

I’m not sure I would recommend this, but if you’re the sort to read books before their movie versions come out–now’s your chance.

My mom first told me about this book after hearing about it on NPR. I got it the next week at the library and dug right in. I am walking proof of the comfort found around Midwest kitchens and tables, and I found the book’s settings familiar (Chicago, Northwestern University, the Midwest in general…) I’ll be honest…the beginning of the book had me muscling through page by page. It’s an interesting premise, this book. It’s like a collection of short stories told about people *around* one character throughout her life. I didn’t think it was going to work, but the later chapters really knocked it out of the park. I won’t spoil it for you, but I was really touched by the end. It grew on me way more than I thought possible, especially in those early chapters. I’m amazed at how well developed the main character is based on stories about other people. Truly a triumph.

When it comes to famous people from history, there are two stories I’ll never get enough of: Jackie Kennedy Onassis and Ernest Hemingway. I’ve been drawn to each of their strength, beauty, tragedy, perseverance and talent since I was in middle and high school. Some might call me obsessed. I just call it heavily invested. Hemingway, one of my favorite authors, led a tumultuous private life. I read and loved The Paris Wife, which depicts his first marriage to Hadley and their time in Paris with Scott & Zelda, Sara & Gerald, and other {famous} friends. But this book captures the voices of all four Mrs. Hemingways, each in the final months of her marriage to Ernest. It’s heart wrenching and, by the time you get to the third section (or wife), it all starts to sound like a sad, lost, broken record that you can’t turn off, and don’t want to. I knew I’d love this book, but if you aren’t as “heavily invested” as I am, it’s still a great read.

The final piece of the Maze Runner puzzle. Thomas, much like Katniss and Tris, faces his toughest fight yet. Is WICKED good or bad? (It’s like a poor-man’s version of the Snape theory.) I have to be honest and say that I’m glad this series is over for me. I grew tired of the cliffhangers every other page. A smooth pace is just non-existent when reading these books, which, over time, gets frustrating and seems childish…even for a YA book. I am interested in seeing how it translates to the big screen, but I won’t be revisiting this series anytime ever.

5. The Girl in the Spider’s Web, David Lagercrantz

To say I was skeptical of a Millennium Series reboot…by a different author…years after the other books were published posthumously by Stieg Larsson…would be a massive understatement. I loved the originals, especially the first, and I was willing to gamble with this new title just to reacquaint myself with these amazing characters, Lisbeth Salander and Mikael Blomkvist (and many others you’ll remember well). It was a gamble worth taking. I applaud Lagercrantz’s ability to pick up characters and intricate story lines that were not his own and create something that feels so organic to the original series. It picks up years after the last book takes place, but like with any good friends, it’s like you never left. Definitely worth reading if you’re a fan of the original series.

6. Sick in the Head: Conversations about Life and Comedy, Judd Apatow

Good, successful comedians must be observant. Finding life’s oddities and bringing them to light is what makes people buy tickets and watch shows. So, hearing the greats–both old and new–talk about their lives, what they find funny and their advice for someone following a dream was a real treat. Frequently touching, mostly brutally honest and always funny, these interviews collected over 30+ years are a treasure trove of greatness. I will admit I didn’t read every single one, opting to stick with my favorites like Adam Sandler, Amy Schumer, Chris Rock, George Carlin, Jay Leno, Jerry Seinfeld, Jimmy Fallon, Jon Stewart, Key and Peele, Leslie Mann, etc. The best, though, was Harold Ramis. What a wise man…taken way too soon. Definitely worth the read if you feel like laughing, contemplating, or appreciating the depth behind your favorite jokers.

I gave you a little spoiler when I finished this book and announced it had joined my top five WWII stories. This was truly powerful. A story about two French sisters during the war, each with her own moral compass and urge to resist the invading evil. I will remember this story for a long time; it made me angry, it made me cry heavy tears, it made me wonder how the world ever repaired itself after so much atrocity and destruction. And loss. While not as eloquently written as All the Light We Cannot See, it remains just as haunting, hopeful and beautiful. Definitely my favorite of this quarter.

I read Mindy Kaling’s first book Is Everyone Hanging Out Without Me? (And Other Concerns) before I had this blog, before I really knew anything about The Office (still know very little), and absolutely devoured her witty, vibrant and extremely smart and insightful musings. Cue up the Alicia: This girl is/was on fire! As soon as her second book was available to pre-order, I was #1 on the library wait list and, again, devoured its 200+ pages as quickly as possible. (It was a bit refreshing after WWII-ravaged Europe!) Her essays are just as delightful as before–so funny, like actual LOL-can’t-stop funny. But, she is also pointedly poignant when she needs to be and it’s these messages that hit home the most. Whether describing the “enormous and profound gulf between a friend and a best friend” (YES!) or how to build confidence (WORK HARD!), I’m convinced she’d be one helluva mom or mentor. So many passages that radiated and, if I had been reading my own copy, would require a plethora of underlines, asterisks and “YES!”es in the margins:

* How “workaholics” in movies and TV shows are teaching kids that hard work is wrong and letting loose is the answer.

* How entitlement is okay, if you’re working hard enough to back it up. That’s confidence.

* “Some people really feel uncomfortable around women who don’t hate themselves.” Be brave.

Of course there are more takeaways and too many hilarious quips to list, but I have to save something for you to discover when you read this after ordering from the above link right now.

There was a time when all mysteries were compared to The Firm and all history change-ups compared to The Da Vinci Code. They were groundbreaking for good reason and completely altered the game. So did Gone Girl–our modern equivalent. Everyone is latching on to its coat tails and over the last few years I’ve read a handful of books lauded as “the next Gone Girl.” This is one of them.

Knoll’s sarcastic title is a play on the Facebook Age of making your life look perfect to others, but if it’s compared to Gone Girl, we can assume that veneer cracks to reveal a broken heroine with juicy secrets. While dark and deception-riddled, I found her story to be more like Carrie Bradshaw and Cady Heron than Amy Dunne. Its twists are defined and searing, but I was missing the deep, gritty trenches of Gone Girl that wouldn’t let you escape. Still a very haunting read that’s worth your time.

10. The Queen of the Tearling, Erika Johansen

Much like all of the Gone Girl comparisons, a lot of new YA or anything with a strong heroine in a futuristic America is now “the next Hunger Games.” I’m okay with this, since I loved Katniss. Erika Johansen’s world of the Tearling is both set in the future, yet feels like it’s straight out of Tudor-ruled England. It’s a fascinating world and her characters are complex, adding to its authentic, yet fantastical vibes. This is the first book in a trilogy that ends when the third book is released this summer. I’m looking forward to continuing this story, but it already ranks high on my {internal} list of YA favorites. (Disclaimer: This reads definitely more for adults than young adults. Its themes are troubling and raw.)