It’s been a few long and difficult weeks around here, but we’ve had some very bright spots that I’ve been meaning to share!

A little over a month ago, my Dad came to visit. It was such a fun week with him here and we made the most of it with many wonderful meals…

and a very cold football game.

Joe’s band did an awesome custom show for Halloween called “Zombie Apocalypse.”  I loved his zombie cymbal players in the school’s old uniforms.

Later that weekend we hit up some shopping and eating in Salt Lake, including visiting the new Penzeys Spice store, which was pretty much heaven for me.

Then, that next weekend, my mom and Mike came to visit.

It was their first time here without it being homecoming. Ha! We made use of all the extra time by making pumpkin cinnamon rolls.

This was a huge deal since A) I haven’t, until then, had any luck with yeast dough at high altitude, and B) my mom is the queen of cinnamon rolls. I know she was the good luck charm I needed to make it work.

This pretty much sums up the entire game. Joe laughing hysterically and my mom staring blankly at a card. hahahahahaha! Too bad it’s blurry, but I don’t even care.

Sorry, mom. Truth be told, she almost won the game.

And, then there was last week’s Thanksgiving. It was such a quiet day, which we really needed. I didn’t take many pictures because we were either in a heap on the couch in our PJs or we were in the kitchen with flour everywhere. But, here are the few I managed to snap throughout the day.

First up, pretzel bites. It’s one of our favorite things to make and eat. I paired them with a cheesy cider fondue that was really easy. The perfect snack for parade/football watching.

This was the only picture of the spread I have (ha!). Shown: turkey, gravy, green bean casserole, rolls, mashed potatoes, spinach tart and Joe’s sliver of canned cranberry. I halved every single recipe. It was the most math I’ve done since roughly 2000.

The best part was, every single thing was prepped in advance, so all I had to do on Thursday was cook everything off. Amazing.

Here’s the vegetarian’s plate. So. good. Especially the gravy, which was a new-to-me recipe that used nutritional yeast. Totally rocked my world. It’ll be my forever gravy from now on. 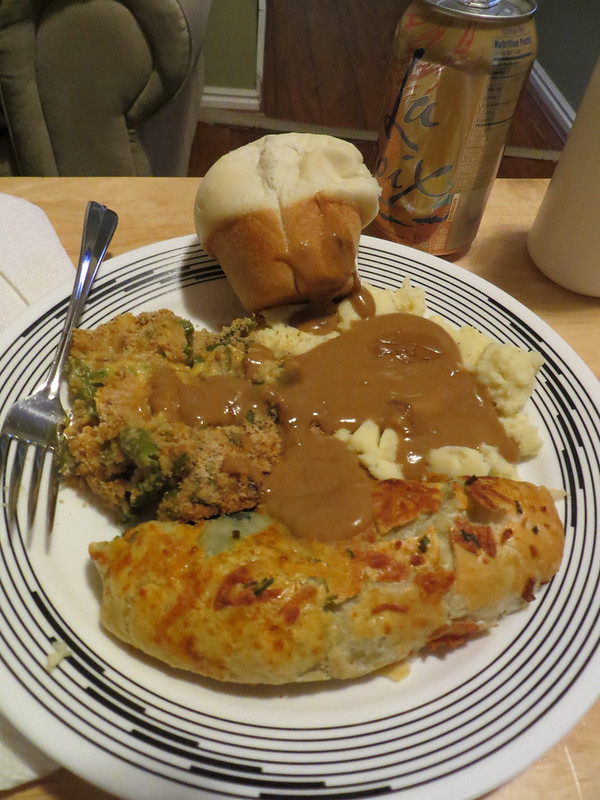 I’ll dedicate a separate post to the dessert I chose (with REAL pictures!), but this was Joe’s Vanilla Bourbon Pumpkin Pie. I’m not a big pie person, but I was happy with how it turned out. Bella was too.

That’s where we’ve been…now we continue to stalk bowl predictions and look toward Christmas and a new year.