I’ve always been a fall girl. Colorful leaves, scarves, sweaters and crisp air have me swooning every year, but there’s something about living in a place that has hard winters that makes you appreciate spring all the more.

Maybe it’s the flower and tree buds that promise life and warmth after so much dreariness, or the baby ducks and rabbits popping up around us that spark so much joy, but every day I feel myself becoming more and more of a spring girl.

I haven’t talked about it on this blog yet, but Joe and I are moving this summer to a place that has an even harder winter. When we were visiting, someone told us they didn’t even have a spring. Just a  bit of fall, a lot of winter and then summer. Guess I shouldn’t get too attached to it, huh? Hard to do… 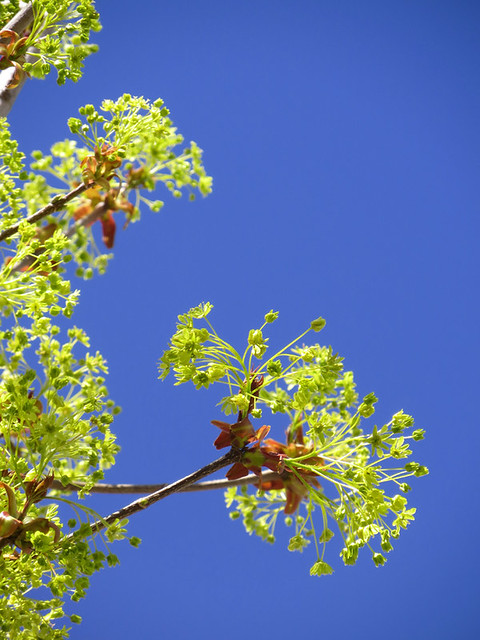 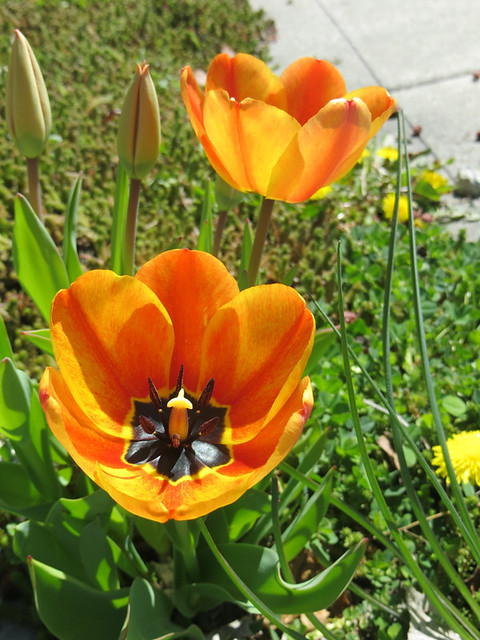 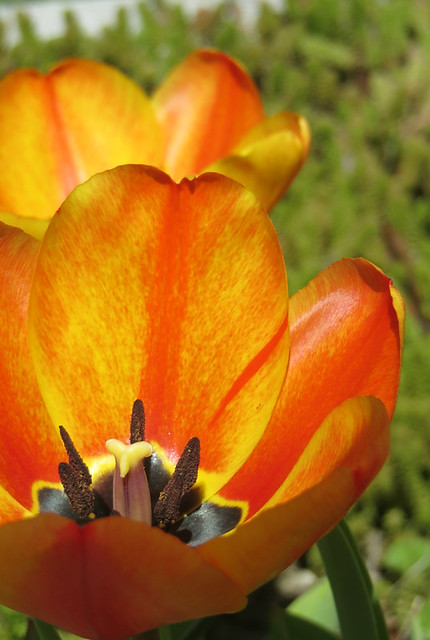 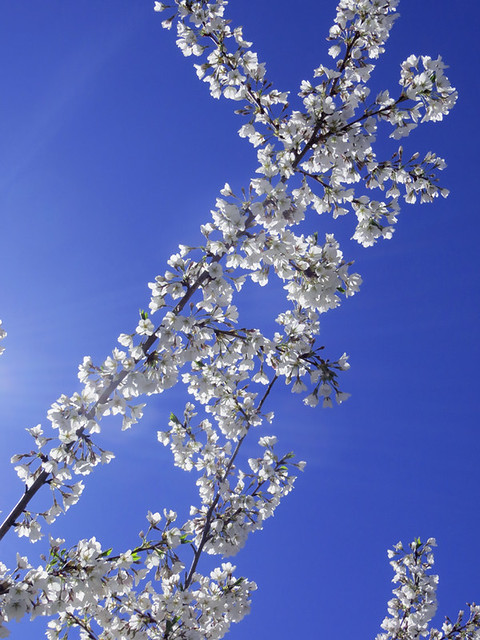 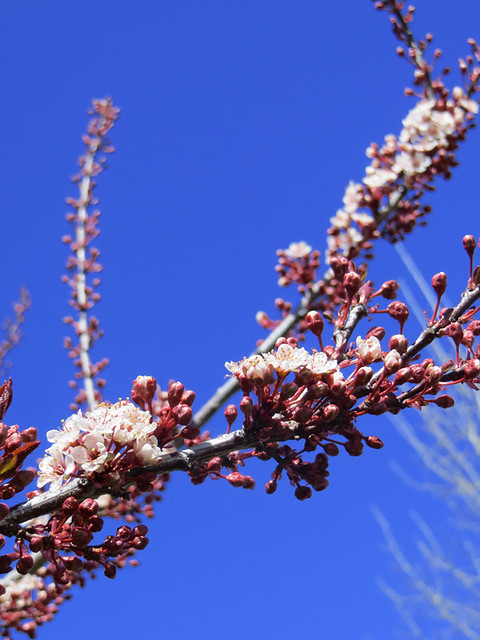 My favorite part of this season? Time in the sun with Bella. 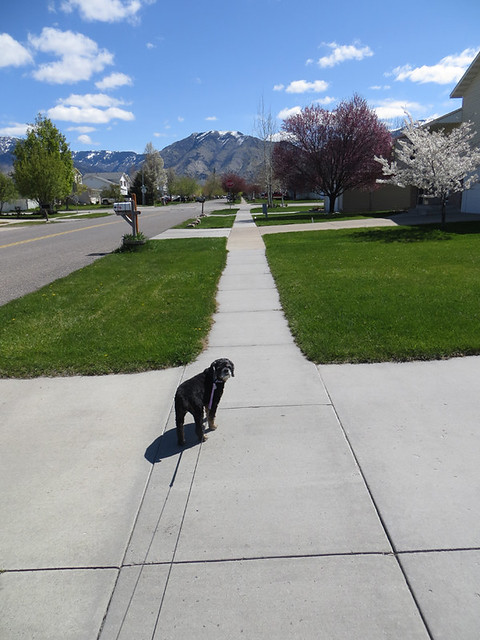 Now for the books…

1. A Widow for One Year, John Irving

Another book off my shelf! No telling how long it’s been sitting there, but this was definitely worth the wait. I had heard numerous good things about John Irving and boy does he have a gift. With words, with story lines, with characters. I was pretty floored. It’s funny, though, to read books that were written before the age of cell phones and internet. The stories seem modern enough, but missing a huge piece of what makes today, well, today. I found myself saying “oh, that would never happen now,” but it didn’t detract from the story of a marriage marred in tragedy and a little girl caught in the shadows. Her incredible story easily fluctuates between sorrow and hilarity. Well done, Mr. Irving.

There was no better time to dig into the comfort and familiarity of one of my favorite authors than when I was running a 102-degree fever for three days. Confined to bed with the nastiest virus I’ve had in a long time, Hemingway’s funny, sentimental and realistic vignettes of his time in Paris in the early 1920s was just what the doctor ordered. It was an interesting time to revisit it, since I had just finished watching the series finale of Downton Abbey, which was ending around the same time in England. I’ve long been obsessed with the expatriates of Paris: Hemingway, Fitzgerald, Stein, Pound, Porter. What an incredible circle! I’m not even sure if I had ever read this all the way through, or maybe it’s just been too long for me to remember, but I have recently read books from this same period, told from different perspectives, and I desperately wanted to revisit Ernest’s. After reading The Paris Wife and Mrs. Hemingway, I was surprised he omitted any mention of Fife (Pauline), who caused the demise of his first marriage to Hadley. But, there she was in its final pages. A fitting end to the demise of his Paris happiness.

Of all the little chapters, his recollection of F. Scott Fitzgerald is my favorite. Here’s one passage I love:

“His talent was as natural as the pattern that was made by the dust on a butterfly’s wings. At one time he understood it no more than the butterfly did and he did not know when it was brushed or marred. Later he became conscious of his damaged wings and of their construction and he learned to think and could not fly anymore because the love of flight was gone and he could only remember when it had been effortless.”

Want to learn more about this special time and place in history? I highly recommend Zelda, The Paris Wife, Mrs. Hemingway, and Midnight in Paris.

I don’t know many people who didn’t like Life of Pi, but I am one of them. Not even the super CGI movie could sway me. But Yann Martel’s newest novel is one of the most anticipated books of 2016 and I had high hopes for redemption. And he almost had me! Halfway through his three-part tale, I was convinced that this was much better than Pi. But the second half quickly gave way to the ridiculousness I couldn’t ignore and in Pi couldn’t stand. I know it’s all symbolic, but sometimes it’s just too much for me. And for someone who reads a little bit every day, his three sections without chapters allow for no easy stopping points. If you end up reading this and loving it, please let me know. I need to understand what I’m missing when it comes to Martel!

This is a colorful fictionalized glimpse into the makers of Jackie’s infamous pink suit. It came out a few years ago to many glowing reviews, but maybe I’m too much of a Jackie fan. I wanted it to be more about her and not the Irish girl who impressively faked a Chanel. The part I loved most was the dedication…”To all those who fell under her spell.” I wouldn’t recommend much that comes after. Wah-wah.

5. The Lady in Gold, Anne-Marie O’Connor

Ever since I saw the movie, I have been obsessed with the art world’s greatest, or worst, tale of loss and redemption. The movie, while practically perfect, was still a movie and I needed to read what really happened in pre-war and post-war Vienna. What I didn’t realize is the Bloch-Bauers ran in the same circles as Richard Strauss, Sigmund Freud, Gustav Mahler and his future wife Alma and Arnold Schoenberg. This circle is just as magnificent to the music world as the Paris circle of the 1920s was to literature. Absolutely fascinating. But, I really wanted a story about one family, one artist and their shared art, but O’Connor nosedives into other’s stories randomly to the point of frustration. If you want to read a comprehensive look at the stolen art of the Holocaust, I recommend The Monuments Men. I’m perfectly happy to relish in the movie version of this incredible story.

6. Spark Joy: An Illustrated Master Class on the Art of Organizing and Tidying Up, Marie Kondo

I was about halfway through Kondo-ing my life when I got this follow-up at the library. It was just the umph in motiviation I needed. Though it doesn’t really tell anything new, it does dive into a few specifics, specifically regarding what she calls ‘Komono,” or, miscellaneous. After I finished, Joe and I sat down and cleared out three trash bags of paper from our office. I really can’t tell you how liberating it feels to have things in order. We have a few more paper stacks to finish, but then it’s on to Komono and Sentimental items, which will be the hardest for me, I’m sure. Hoping to have it all finished before we move this summer.

This has been on my list for a loooong, long time. Since I had my own copy, I kept deferring to my library reserve schedule and it kept getting pushed to the side. I’m glad I finally had a chance to fall into it, because that’s exactly what you do! This story is nothing short of beautiful. I loved it much more than I enjoyed Anna Karenina, which is high praise. Jane is the most exceptional heroine — independent, stands up for what’s right, curious and courageous. Quite different than most of literature’s leading ladies during that time. I so loved this quote of hers… “Now I remembered that the real world is wide, and that a varied field of hopes and fears, of sensations and excitements, awaited those who had courage to go forth into its expanse, to seek real knowledge of life amidst its perils.” #swoon I’m slowing making my way through those never-read classics!

Before I picked this up, and before I finished Jane Eyre, I was thinking to myself that many of this quarter’s books were feeling like duds. I didn’t have one that called for celebration or caused me to lose myself in its pages. Until this. Years ago my aunt mailed me a big box of books about food. Not cookbooks, but stories. I’ve slowly been making my way through them and this was a total gem. Set in an upscale restaurant’s cooking school, the book features backgrounds on each student and the ingredients that help them cope with whatever lies beneath the surface. It’s beautiful writing about food, about people, about relationships, about the magic of cooking. I read it in less than a day with the laughs flowing as easily as the tears. I couldn’t consume it (har) fast enough. And when I went on Amazon to find the link, I was pleasantly surprised to find its sequel. Hopefully I’ll like the second course as much as I did the first.

Another book off my shelf! We’re slowly clearing the decks before our move this summer. I have long loved Philippa Gregory’s accounts of England’s contentious fights for the throne. I have read her series on all of the Tudor/Boleyn players (except her newest) and I had picked up this first book of The Cousins’ War series after we visited the Tower of London, as it deals with one of its craziest mysteries. I really enjoyed this book and one night Joe crawled into bed where I was reading and asked me if I liked it. Here’s how it went down:

M: It’s just like Game of Thrones!
J: Well, that’s good since this is what GoT is based on.
M: What are you talking about?
J: The Cousins’ War. It’s what inspired GoT. York = Stark, Lancaster = Lannister?
M: <insert straight-faced emoji> How did I not know that?!

Now I can see where George pulled some of his juiciest content, ripe for the picking. I’m looking forward to watching its TV treatment soon.

10. My Life in France, Julia Child

I absolutely adore Julia Child and her chronicles of living in France are so dreamy. This book was the basis of her portion of Julie & Julia, one of my very favorite movies. I could relate to her thoughts on living overseas and it frequently made me think of our time in China, Mexico and Italy.

It was magical to hear in her own words the formation of her Cambridge kitchen, which we saw three years ago. I loved that she called authoring her famed cookbook collection as “cook bookery” and I laughed when she refers to food shopping as “marketing.” When you work in communications, you only know one definition for that word!

Bottom line: I love Julia. I just can’t get enough of her and found this book wonderful in every single way.

11. At the Edge of the Orchard, Tracy Chevalier

Chevalier is one of my very favorite authors of all time. I completely lose myself in every one of her vibrant stories that deftly weave fiction with nonfiction. She has such a knack for bringing moments in history to life. This tale of pioneers in Ohio and California is beautiful and its characters are so real. But I wouldn’t call it my favorite of hers. I tend to prefer her European settings over the American, but still very much worth the read.

Next up the queue: